After the conquest of Nablus by John Horoconus, the entire region of Samaria  was under the rule of the Hasmonean kings until the days of Pompey, which ripped Samaria and its surroundings and annexed them to Syria (63 BCE). The land  Samaria came under Judah again, during the reign of King Herod.

Herod glorified the capital of Samaria, mainly against Judah’s capital – Jerusalem, and called it Sebastia. In Most of the time, Herod’s relationships of the Samaritans were good, mainly because of their loyalty, and the fact that they refrained from rebelling against him, as the Jews did.

After the execution of his wife Miriam the  Hasmonean, Herod went to Samaria to recover from illness. There, he married a Samaritan woman named Maltakki, thus violate the ban on marriage to foreign and Samaritan women, which was set by Ezra and Nehemiah years earlier. After Herod’s death in 4 BC, her sons, Archileus and Antipas inherited the Samaria region.

After Herod’s death, and with the strengthening of Roman rule, the Land of Israel moved to the control of the Roman Commissioners, who in most of the cases pressured the Samaritans and aggravated their situation.

During the reign of Roman Commissioners in Israel, the conflict between Jews and Samaritans also culminated. The clashes usually revolved around areas of worship and religious discussions. In Josephus Flavius Chronicle, there is a story , found  also in a slightly different version,  in the Samaritan chronicles, is  about  a clash between Jews and Samaritans, during the time of Commissioner Comanus.  Samaritans murdered Jewish pilgrims in the city of Ein Ganim (Jenin of our days), and as revenge, the Jews robbed some Samaritan villages. The Samaritans revenge again, and robbing the  Jewish village  Maresha.( Near Bet Govrin ). Both sides send  delegates to the Roman commissioner in Syria – Quadratus, and the latter found the Jews guilty, and execute several of their leaders. The end of the story is with a complaint of the Jews to the Roman Emperor. The emperor heard testimonies from both sides and finally decided to execute some of the Samaritan leaders.

Another Story of  Flavius occurred on 36CE   (Jewish  Antiquitates 18 / 85-87).  A false prophet,  promised  the Samaritans, that  he know  where  the burial of The Mishkan Tools placed. (The tabernacle ) . Following a gathering of Samaritans around him and fearing from a rebellion, the Roman Commissioner Pilate Pontius, sent a legion of troops and slaughtered the pilgrims. 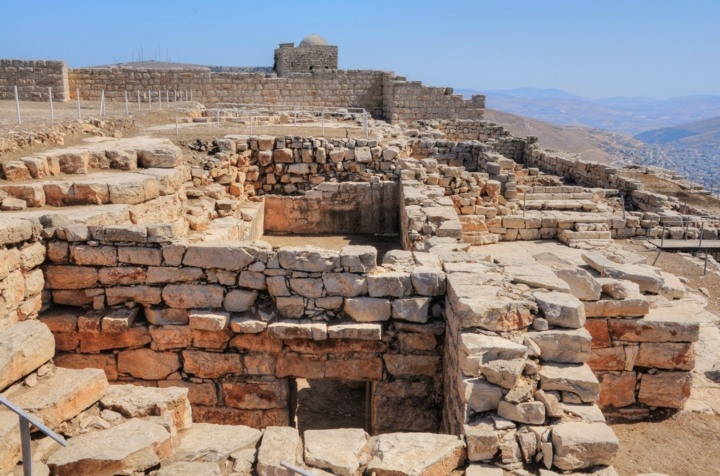 In 66 AD the Samaritans rebelled against the Romans. A large-scale gathering of Samaritans at the top of Mount Gerizim is interpreted as rebellion, and the regional army chief, Espasianus, and his son Titus oppress it with a hard hand. Eleven thousand six hundred Samaritans are slaughtered by the Romans on that day.
Nablus of our days was built and named by  Vespasian, as  Flavia Naples (New Town of the Flavian dynasty). Sebastia was destroyed and Nablus inherited its place as the Samaria metropolis.

In 73, the last stronghold of the Jewish revolt in Masada fell. Whether Samaritans were present among the besieged of Masada or not, among the ruins of the city,was found papyrus written in ancient Hebrew containing the name Hargerizim (‘הרגריזים’) in one word, as the Samaritans write it.

During this period, before the destruction of the Second Temple (70 AD), and until some time, after the Bar Kochba rebellion, the hatred between the two communities,  Samaritans and Jews has subsided a little. The evidences of this , are  from  the Jewish sources. One example is of Rabban Shimon ben Gamliel :

Every commandment held by Kothis, they strict with it much than Israelite [Tosefta Pesachim 2: 3]

Another  example is a debate  between Rabbi (Rabbi Yehuda the President) and Rabban Shimon Ben Gamliel :

[Khoti = A derogatory nickname of the Samaritans by the Jews]

The change in Jewish scholars’ attitude toward Samaritans began with Rabbi Akiva’s disciples, and a little bit later.

There are different opinions whether the Samaritans were part of Bar-Kokhba revolt against  Hadrian (132-135) or not, but one way or another, Hadrian’s persecution of the Jews, especially the prohibition on circumcision, and the The prohibition on keeping the Sabbath, also affected the  Samaritans, and according to some sources, the samaritans  were ready to die rather than to leave their  new-born sons uncircumcised.(Contra Celsum 2.13)

There are also evidences of the various chronicles, of another Samaritan rebellion during that period, which was brutally rejected by the Roman armies. At that time, the Romans destroyed all the Samaritan scriptures, and only the Torah scroll and the priestly dynasty remained in their hands.

The Samaritans after the revolt of Bar Kochba

After Bar Kochab’s revolt and the suppression of the revolt by the Romans, there are much evidences that the Jewish settlement in the Israel was extincted. Many Jews were expelled, while others emigrated out of the Israel Land.

Towards the end of the second century CE, there was a positive change in the history of the Samaritan people . Following the dilution of the Jewish population in the country, and the toleration of some of the Roman emperors who subsequently ruled the country, the Samaritan settlement extended beyond the borders of Samaria, to the cities of the coastal strip, as well as northern and southern cities of the country. The Samaritan population has become a majority in the Land of Israel, estimated to number one million and two hundred thousand. Many localities that were previously considered Jewish localities have become settlements with a distinct Samaritan majority.

(C) All Copyrights Reserved to The-Samaritans.net 2020